SBM Bank India powers INDmoney, a neo banking platform and a family Super Finance App so named for the financial independence that it affords its users within its country of origin - India.

A smart, 360-degree, feature-rich ¬financial suite, it enables customers to save, plan and invest. Since its launch in 2019, the FinTech platform has quickly grown its userbase to 5 million - backed by innovative features such as the ability to invest in US-based stocks, neo banking and a user-friendly deposit and ¬finance tracking & management system.INDmoney is backed by reputed global foreign institutional investors spanning Tiger Global, Steadview Capital, Dragoneer and Sixteenth Street Capital.

I am one of the few “Made In India” Tech entrepreneurs to have lived through the Web 1 & Web 2 eras - now entering the Web 3 world. Right from the days of working at "Google in India" in the early 2000’s to founding successful TravelTech and Payments (GoIbibo, PayU) businesses in the late 2000’s to experiencing massive scale acquisitions (redBus), mergers (Ibibo-MMYT) and a $1.4Bn+ exit in 2017 and now building INDmoney - a super finance application that helps consumers to save, plan and invest.

In the first wave of the internet in India, we witnessed how large consumer tech spaces such as Search, Social Networks, Communication and Entertainment belonged to Google, Facebook (FB, Instagram, WhatsApp) and Apple. There were hundreds of copycat models to ape Orkut, MySpace and Facebook. All of these copycats failed to establish network effects, scale and technology prowess. Till 2010, it was gloomy in the Indian tech space. Investors and ecosystem players had envisaged that the way the Chinese internet evolved, India would too. The bets were to give birth to: an Indian search platform (like Baidu), local social network and communications systems (like Tencent/WeChat.) But this did not play out - resulting in disappointment across constituents.

In the second wave, numerous “Made In India” platforms such as Flipkart, PayTM, GoIbibo, PayU, Ola, Swiggy, etc. challenged global companies such as Amazon, Uber, Expedia, Booking.com and in fact, started winning. This was the first time that we saw the ‘silver lining.’

In the third wave, Indian entrepreneurs are now beginning to reimagine business models and user experiences to solve fundamental problems that even large, global platforms cannot match. Sectors such as FinTech, EdTech and HealthTech are where massive innovation is happening. In fact, deep-rooted traditional companies are being challenged and acquired by upstart startups. Indian stacks such as UPI and UIDAI have further enabled transformation. Also, the innovation in banking driven by players such as SBM Bank India has further catalyzed this movement - especially in the FinTech space. For example, in partnership with SBM Bank India, (i) The INDmoney app has reimagined and enabled Indians to invest in USstocks; (ii) Slice is continually challenging the large incumbent credit card players.

What is driving "Made In India"?

Talent: In the early 2000’s, talent emerging from engineering institutes or MBA colleges wanted to work for established multinational and consulting companies. Working in startups was frowned upon and was akin to a social stigma. You did not want to tell your aunt that you worked for a small dot com. This has significantly changed and now, the trend favors startups. Students in their third and fourth year of college start participating in startup culture - especially in areas such as data science, software development, design and product management. There is now a clear belief that we can “Make In India” to create massive impact and value.

Large Exits: The industry has demonstrated 'value creation' which was elusive for a very long time. Transactions such as Ibibo-MMYT (2017), Flipkart-Walmart (2018) and IPOs such as Zomato (2021), Nykaa (2021), PolicyBazaar (2021) have clearly demonstrated massive value creation for investors, founders and their teams. These exits drive more energy for innovation, capital inflow as well as a belief in value creation. Each of these companies have further helped create hundreds of entrepreneurs and hence, new startup energy.

Funding Ecosystem: From an era where raising capital was a struggle for teams and companies - in the present time, the supply of capital has grown by leaps and bounds, driven by massive liquidity and the large opportunity that India represents. Investments in India grew 3.8x ($38.5Bn) in 2021 as compared to 2020 - faster than China’s at 1.3x. The share of VC funding in India accounted for greater than 50% of overall private equity (PE) and VC investments in the country in 2021. The beautiful thing about this is that Indian Tech has ecosystem players backing ventures right from the idea stage to IPO.

There’s never been a better time to “Make In India.” The market has access to capital, and the cost of executing has gone down. Internet users have reached the tipping point. “Made In India” players now have structural advantages, tech prowess and deep-rooted understanding. Global players will find it hard to compete with “Made In India” platforms within FinTech, HealthTech, EdTech, SaaS. The next 10 years are going to create 10x more value than the past 10 years did - changing the Nifty50 pecking order forever! 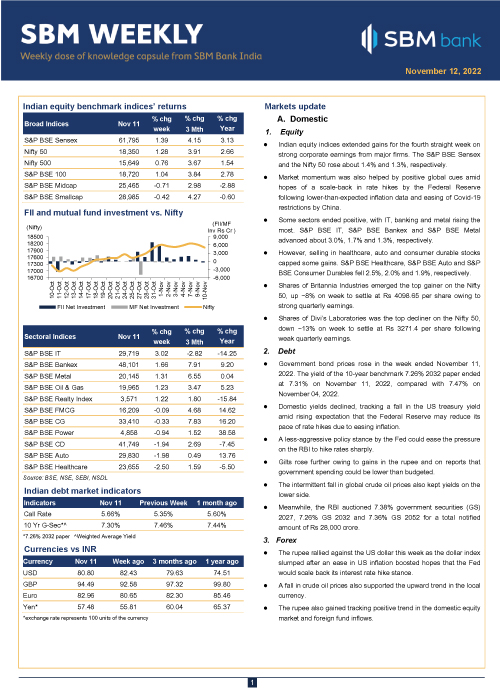